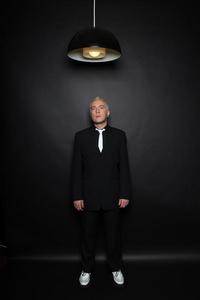 Chris lives in Leeds, and has done for some time.

He enjoys cups of tea, music in all of its weird and wonderful forms, playing the bass guitar, playing the drums badly and reading about mass murderers.

In winter, he has been known to wear up to six layers of clothing.

Chris gave up smoking in 2009 and has been pissing and moaning about it ever since.

The first song Chris ever wrote was a tragic vignette of deception and jealousy from his sister’s (now sadly deceased) rabbit, Mischief, which went, ‘Mischief bit me all the way, and mummy put a flaster on’. Chris could not pronounce the word ‘plaster’ properly, because he was three.

Chris played rugby league between the ages of 8 and 15 (main positions: centre and full-back), and always wanted to be a rugby player, until a knee injury put him out of the game. So he took up playing the guitar and smoking cigarettes instead. This was until he gave up smoking in order to take up full-time pissing and moaning.

He bites his nails, but not because he is addicted to biting his nails. It’s because he can’t really be arsed with clipping them every few weeks.

His favourite pursuits outside of music include thinking about music, and reading about bands.

(in no particular order, apart from Number 1)

Favourite Cities Around The World In No Particular Order

Top 1 Curry House in The World, Ever

Top 5 Things That I Can Cook

Top 5 Beatles Songs That Aren’t The Obvious Ones

Top 5 Beatles Songs That Are The Obvious Ones