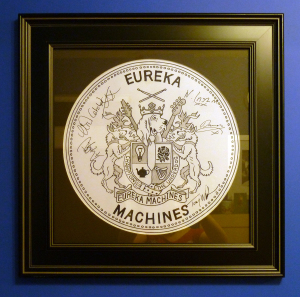 More news soon about the next Pledge campaign.  But first…

We’re auctioning the original hand drawn artwork that was the basis for the Eureka Machines crest that you’ve seen behind us at our gigs for the last few years, and even on the telly.  It was created by the genius that is Tony Wilkinson, who also drew the cover of Remain In Hope, and until recently it was hanging on the wall of his local in Darlington.  All of the band have signed it, as well as the artist, and all proceeds from the sale will go to the Stroke Working Age Ashington Group (SWAAG).

Here’s a few words from Chris about the auction:

Eureka Machines played a gig in Darlington and we met a nice bloke called Tony Wilkinson. You know when you meet someone and you think ‘there’s something about him’?

One of his friends was telling us about these amazing paintings he does – I asked to see some, and was absolutely blown away. In particular there was a painting of John Lennon that I felt like I could reach out and touch, and he was just showing me rough shots on his camera phone. Like many a Northern troubadour before him, he’d hidden his not insignificant light beneath a similarly large bushel and I encouraged/badgered him into doing some bits for us, including the amazing artwork for our third album Remain In Hope.

I’d had this idea for a band crest, something which showed a load of stuff that the band stood for – like championing the underdog, Guinness and gallons of tea. I gave him a really basic idea and a week later he came back with exactly the right thing.

This is his first draft of the now-slightly-famous ‘Eureka Machines crest’, which has been behind us at every gig we’ve played for the past four or five years, and featured on Emmerdale Farm as well. It’s been signed by the artist himself, Tony Wilkinson, as well as the four of us.

It’s a total one-off, and we’re auctioning it for the benefit of another total one-off, Mr Ian Tunstall, formerly proprietor of ChangesOne Records in South Shields, and supporter of underground rock music for as long as I’ve been in bands.

Tunny, as he is affectionately known, had a devastating stroke a couple of years ago. Recently, his stroke support group SWAAG was threatened with closure, and so we’re flogging this bit of artwork in an attempt to raise a little cash towards helping them move forward.

More information about the auction, as well as more photographs of the artwork, can be found on the auction page – click here to see it, and maybe even place a bid…